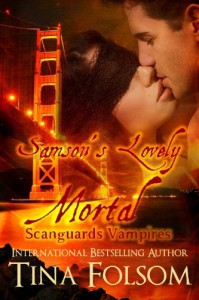 Okay, I reread it so I can replace my review that mysteriously disappeared. I have a feeling I enjoyed this story more than first time than the second, but I've read a lot since then and my tastes or expectations may have changed a bit.

Delilah was a decent character, but we don't actually learn much about her. It's Samson that we learn about, really. That worked for me - I found him much more interesting than Delilah. She kinda felt like a placeholder.

The romance and sex were both steamy and sweet, though I felt horrible for Samson with his whole ED issue. Vampires are always seductive, sexual creatures in these paranormal romances, so to be basically neutered must have suuucked. The blood-bond was interesting and I wish we could have spent a little more time fleshing that out.

As for the drama, I didn't remember who the bad guy was from my original reading, so I was pleasantly surprised when the Big Reveal came around. I do think the story would have benefited a little from another (or more serious) physical threat to Delilah at the end. Really ratchet up the tension, you know? Alas, it was still decent - even though it was brought on by Delilah's TSTL moment.

We get some POVs from other characters, which I enjoyed because they weren't long and involved, pulling away from the main story. They worked well and gave us a little insight into the other players. Unfortunately, I didn't really feel much draw towards the other Scanguard vamps. I doubt I'll continue with this series unless a blurb really grabs me.