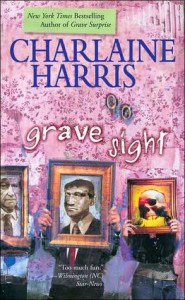 Oi vey, that was a alot of talking.

I loved the premise of this book, but the first person narrative kept me away for quite a long time. Finally biting the bullet, I gave it a shot and I'm not all that glad that I did.

Aside from Harper's original search and a quick side job, she didn't use her "grave sight" for much of anything. Mostly it was just being nosy and trying to solve a murder (even though that's not usually her thing) while townsfolk attempt to scare them into leaving. This is where a huge problem for me arises. She's been working around the country, using her gift to find dead bodies. So even if she's not buying commercial time during Super Bowl halftime, she's known throughout the country. One would think that that level of renown would come with a few connections. Connections that would help when this small hick town decides to band together to terrorize you in very illegal ways. You know,somebody you could call to be like "Hey, tell these fucking rednecks to lay off." and they could because they've got that much pull. Seriously? It sounds like Harper and Tolliver are just homeless people that wander the country doing odd jobs. And their lives sound miserable.

There really was no happy ending to this story. Harper and Tolliver dip the fuck out ASAP and it sounds like half the town is dead or in jail. The romance, which doesn't really exist, is literally cut off like a fish head in the last couple pages. It's almost like "The Big Breakup" scene was mysteriously missing from my e-book, it was so sudden. And just a total nonentity. Like the author was about to write "The End." and realized the romantic interest hadn't been wrapped up, so she just had the characters awkwardly wave goodbye and walk away. Everything is just kinda... over. So fucking weird.

The relationship between step-siblings Harper and Tolliver was doubly weird. The extreme dependence on Tolliver that Harper had felt bizarre. After the rough life she had, she could live well but instead clings to her brother and lives an empty sort of life. Since we're stuck in first person perspective, we don't get to know what Tolliver is thinking or feeling, but I felt like he resented her for making them live this life. I dunno, but the relationship felt close and strained at the same time.

The worst part, though, was that by chapter four, I knew the outcome. And I was 100% right about every single detail. Just two little sentences and the author gave away the whole thing. I kept reading - bored as I was - though, because I wanted to know how it was revealed and if there would be a big confrontation where Harper awesomely wins over the whole town (it doesn't, by the way).

I dunno, this whole thing was weird. It was boring and a struggle to get through. I wouldn't recommend it. At the same time, I feel like I can't give up just yet and I need to give the series a second shot with the next book. I'm having a crisis of faith or some shit.