Daughter of Time (After Cilmeri, #0.5) by Sarah Woodbury 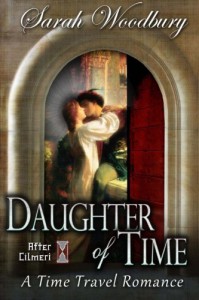 WHAT THE EVERLIVING FUCK WAS THAT.

Please excuse me, because I'm about to rage out.

The title - the freaking title - of this book is "Daughter of Time: A Time Travel Romance", so you'd think the romance would be important, right? No. Not really. This book feels like an excuse for the author to show us how knowledgeable she is about 13th century Welsh skirmishes. It's constantly the Prince of Wales going to meet this guy, then that guy, then walking into a trap, then meeting another guy before walking into another trap. And then sprinkle in some romance where the girl gets pregnant before you even realize they had sex. I do not give a flying fuck about all the battles - I read this for the romance, god dammit.

But what really grinds my gears and gets into spoiler territory... (though really, you'd be doing yourself a favor to just read the spoiler, find out how disappointing the ending is, and skipping the book to save yourself)

THAT IS NOT A HAPPILY EVER AFTER, GOD DAMMIT! She ends up going back to the 20th century - like they always do - and raises her son alone, miserable, and constantly pining for her lost love. The end.

You know that scene in Raiders of the Lost Ark, where that Nazi's face melts? I felt like that when I got to the words "The End." and realized I had just been Punk'd. And Ashton Kutcher was nowhere to be found. That was so... OMG I'm raging. I'm raging hard.

That's not how you end a romance, if you could even call the story a romance. In the loosest sense of the word, sure... they fell in love. But mostly, we just got a lot of conversations about tactics and who would betray who on which battlefield named something you can't pronounce, but has lots of "wyns" in it. I'm pretty sure there was a Gwynwynwyn somewhere in there. What the fuck, man? I kept reading in the hope that there would be some epic romantic ending where we find that Meg has saved Llywelyn's life, rewritten history, and they live happily ever after. Or they get to be together until history has him die and then they're transported back to the 20th century. You know... together somehow?

But they're not. It's the most unsatisfying ending I've ever read.