Very recently, I was asked "Just what the fuck my problem is with the ending of the Harry Potter films?"

So, I shall tell you.

It's not true to the book. I know, I know... none of the movies stick entirely to the books. But the 'grand finale' of the movie is so different from the book, it doesn't feel right. Breaking down just the final battle, the best parts of the book are left out of the movie.

Where have we seen this before? Ah yes, in The Goblet of Fire - when Harry and Voldemort first face off. The whole green vs. orange thing happens when related wands are forced to do battle against each other. Both Harry's wand and Voldemort's wand had cores made of Fawk's tail feathers. Their interaction was specific to those two wands. In this final battle during the Deathly Hallows, Harry is not using his phoenix feather wand - he's using Draco Malfoy's old wand - and Voldemort is using the Elder Wand. This green vs. orange forced interaction shouldn't be happening. But it's more appealing visually than the truth, which would have sent the Elder Wand flying towards Harry the moment Voldemort used it against him.

Don't get me wrong, I'm all for Ron and Hermione getting their groove on. But it's the wrong place! They were supposed to come back from the Chamber of Secrets and kiss in the Room of Requirement and Harry is supposed to be like "WTF? Really? Now is the time for this?" It's a sweet and funny moment that we miss out on for no real reason. I don't feel like the kiss in the movie is favorably comparable to the kiss in the book. But hell, at least they included it! 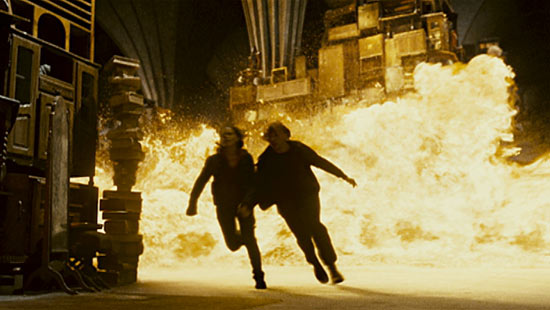 I was also really looking forward to the Crabb's "Like it hot, scum?" line during his failed attempt with Fiendfyre. The diadem should have been destroyed by the fire, giving Hermione another chance to show us how brilliant she is when she explains what must have happened. Apparently the movie makers thought stabbing the diadem was better, but I disagree. In the books, the Horcruxes were destroyed in a different manner by a different person each time. In the movies, we just fall back on the faithful basilisk fang. Tired. We did that already. Twice. Three times is too much.

One of my favorite moments. Not because Mrs. Weasley says the greatest line in all seven books, or because Bellatrix is finally defeated and the bitch deserved it for killing Sirius. Oh no. It's because, in the book, the moment that Bellatrix is defeated, Harry drops his invisibility cloak and Voldemort's anger at his sidekick's death is an explosion that rocks the Great Hall. It is the equivalent of a countdown to the final face-off between Harry and Voldemort. It's the gunshot that signals the start of the race. And it leads into the heart pounding, tense moments where Voldemort and Harry circle each other, wands raised, taunting each other until the moment of attack.

That scene is my favorite. Everything is revealed. It all makes sense. The circle has closed and here we are - who does the Elder Wand owe its loyalty to?

The taunting, the explanations given, the secrets revealed... it's the perfect way to end this story. And the movie doesn't do that. Instead, we've got Voldemort chasing Harry through the ruins of Hogwarts. Lots of hugging on Voldemort's part. Base jumping. Neville beheads the snake in front of Hermione and Ron, which pales in comparison to the book in which Neville miraculously pulls the Sword of Gryffendor out of the Sorting Hat and in one clean swing, beheads Voldemort's snake in front of the students, Death Eaters, and Voldemort. It draws the eye of everyone. It is an incredible moment. The centaurs and beasts of the Forbidden Forest come out fighting and everyone must take cover. They are crammed into the Great Hall, Voldemort's spells ineffective on the students and numerous duels happening at once. It is an epic build up that the movies skipped out on.

This shit doesn't even happen. And it's quite silly. In the book, Harry uses the all-powerful Elder Wand to repair his beloved phoenix feather wand. Then puts the Elder Wand away. I'm fine with breaking the Elder Wand - nobody needs that shit. But Harry's wand meant so much to him. It had saved his life so many times. The connection he had with that wand is completely ignored and apparently means nothing in the movie. The Elder Wand even less.

It's always disappointing when the movie can't include everything that was in the book. But it's infuriating that instead of leaving things out due to time or storytelling constraints, they changed what happened. And they changed it so much, it's very hard to forgive. They changed so much, for no apparent reason. *weeping*