And Then He Kissed Her (Girl Bachelors, #1) by Laura Lee Guhrke 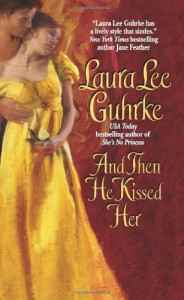 I must say, Laura Lee Guhrke has a formula that seems to work well enough and boy, is she stickin' to it!

I've read two of her books in a row and while I have no complaints about her writing ability, I've noticed a couple things that have appeared heavily in both books. While I'm not opposed to authors recycling - it's pretty impossible not to sometimes - I am opposed to the same exact thing being used repeatedly in the same series. If you can't come up with five original stories, then your series should be four books... not five.

#1. Women are super sexy after running 5 blocks through the rain. Her heroines are constantly running out into a downpour - not getting caught unawares, no... running out into the rain. Because shit is important enough to warrant indecorously running through the rain, but not important enough to do it while dry. And men find this incredibly appealing - boners were had by all (the men, not the women... though to be fair, if the author included a hermaphrodite heroine in one of her HRs, I'd gladly eat my review with a side of humble pie).

#2. Men should make a woman orgasm once before intercourse and then take his own pleasure without bothering to make sure she orgasms during intercourse. This exact formula for a sex scene was used in both stories. It is not at all a passionate affair. It comes across more like a chore, getting rid of that pesky hymen before you can truly enjoy the act of love making. It's god damn annoying. The 3 pages of undressing followed by a painful and emotionless deflowering is not appealing in any way. Laura Lee Guhrke's imagination is not very colorful when it comes to sex. I guess historical romance was the right genre for her, since she can blame the lack of passion on the period and setting. But we all know passion isn't limited to the 20th century and authors have managed to express it just fine, so I dunno wtf the problem is here other than the author's lack of imagination (or passion...).

#3. I had another one, but I forgot due to my raging out on the previous point. Doesn't matter. I'm worn out on the repetition, so I'll save the rest of the series for some other time.

and then he kissed her girl bachelors laura lee guhrke