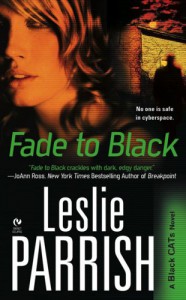 Stayed up until 5am to finish this one. Pretty damn good! Stacey and Dean are both well-developed characters that are smart, determined, and courageous. I really liked them and had no complaints about either of them.

I know this is listed as a romantic suspense, but the romance really does take an appropriate back seat to solving the horrendous crimes being committed by the Reaper. There's a little bit of posturing, a sex scene, and a HEA, but the meat of this story is the suspense. And boy, was the suspense good! I had considered who the killer was due to a single sentence, but dismissed it pretty quickly. The other suspects seemed a lot more likely. Nope! I guarantee you'll be surprised at the big reveal.

The reason this book wasn't a five star read for me was because of the climax. It wasn't exactly a dud, but after all the build up, it could have been much more explosive and dramatic. I almost feel like the author had had enough of the whole story and just wanted to get it over with.

Basically, this was a really good story. The mystery stays a total mystery, the horror is appropriately horrifying, the romance was sweet and sensual, the characters were three-dimensional and the good guys were actually good people. No TSTL moments. No steadfast and stubborn denial of facts. No over-the-top plot devices. I was totally into it, start to finish and would definitely recommend it.

Side note: It felt like there was something going on between Lily and Wyatt (two supporting characters - a member of Black CATs and the leader of the group). I didn't really like Lily. I thought she was irresponsible and took her job entirely too personally. On a hunch, I checked out the blurbs for the other two books in this trilogy and found out that the Lily/Wyatt storyline continues in the background of the next book, then is the main focus of the third book. Unfortunately, I am sooo not interested in how Lily almost gets herself killed by being irresponsible and taking her job entirely too personally. I wish the subsequent stories focused on Brandon (another Black CAT computer nerd) and maybe Wyatt with anyone but Lily. *sigh* Oh well, at least I got one damn good story out of this trilogy!
2891 FOES VANQUISHED