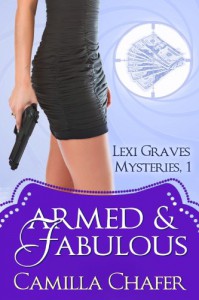 This is just a mess. A ridiculous mess.

While she's trying to get herself killed, she's also supposed to be planning her older sister's baby shower. But her sister kinda hates her and Lexi feels the same. So why she was asked to plan the shower in the first place, I don't know. But the side plot of this baby shower is just silly. It doesn't further the story, it's just a distraction.

Then we get a love triangle, which makes no sense. Neither of the guys are fleshed out, all we know is that they're gorgeous. So Lexi is torn between two men whose only qualities are "being hot", which doesn't make her seem very smart. Especially when she literally knows nothing about one of them aside from his name. I wouldn't even be surprised if one of these guys turns out to be a villain because she hasn't done her due diligence in finding out just exactly who she's making out with. Not smart, Lexi. Not smart at all.

I will say that there are a few seriously funny moments. I would have DNF'd this earlier but then I'd catch a laugh and keep on. Unfortunately, I had enough of Lexi's blind stupidity and her repeatedly dragging her friend Lily into danger.

She's not very fabulous and she's not even armed, so screw this book.
2891 FOES VANQUISHED