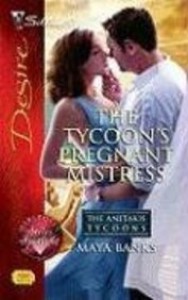 I've seen this book referenced so much, I decided I just needed to bite the bullet and figure out what the fuss is about. It's was pretty good, I guess? It was just so unbelievable. And while I could forgive most of it as just being a Silhouette Desire book, there was one thing that I couldn't stand.

Marley just... is. There is no mention or appearance of family, dead parents, siblings, cousins, foster care, what have you. There's no mention or appearance of a single friend - there's no sassy best friend or mentor in this woman's life. There's no mention of previous employment, schooling, a tattoo from a drunken night in college, a trust fund, past heartbreaks... she literally has no past. There is mention of two things: she gave up her apartment to move in with Chrysander, and she only worked for him for a few months. So, she obviously had some form of income before Chrysander if she was able to afford an apartment. But it's almost like Marley just appeared, fully formed, out of the air one day. And you can say that it's due to her amnesia, but there's no self-discovery on her way towards remembering - she just existed. So it was nearly impossible for me to connect with her. She just was.

So yeah. It was a decent story, I kinda liked it. Kinda cuckoo, but whatever.
2891 FOES VANQUISHED