Maiden and the Monster 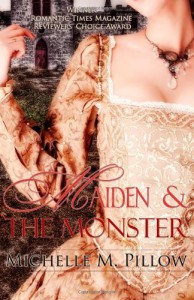 My biggest issue with this one was with the stupidity of the characters. Both the hero and heroine were painfully clueless. Your wife is upset and thinks you despise her, but you have no idea how to tell her you adore her? Hmm, I dunno... maybe you should just say so, you fucking moron. Every other page was a Big Misunderstanding because Eden was pathetically naive and Vlad was horribly introverted. Neither of them actually saying what they think or feel, allowing the other to jump to outrageous conclusions that resulted in tears or violence.

The other issue I had was with the wording used - entirely too modern. I don't believe for a moment that the words "clit", "pussy", and "cock" were used so commonly back then. "We sort of hoped..." is also too modern. But whatever.
2891 FOES VANQUISHED