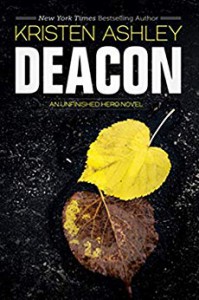 Because this is a Kristen Ashley book, I felt like I read this entire book simply waiting for somebody to get kidnapped.

Not exaaactly her typical story, when compared to her Chaos, Colorado Mountain, and Dream Man series. Close, when it comes to the alpha-hero and slang, but definitely not all action packed and drama-filled like her others.

Still, I really enjoyed it. Not too much happening aside from relationship-building. I kept expecting something to happen, where Deacon would have to save the day and all that... nah. It's almost boring, compared to the action-oriented stories I'm used to from KA, but it didn't reach boring because it was so sweet. It was actually kind of nice to read a KA story that didn't involve all that nonsense. I mean, the previous KA book I read... the girl got kidnapped like 4 times and the hero got kidnapped, too. A bit much there.

There is a scene in the book where Deacon is ranting about something that happened in his past. And it is fucking dark. Dark dark. Pitch black dark. It was hard to handle because he was saying it so frank and bluntly. Rough scene, man. Prepare yourself for some darkness near the end. The fact that KA went there makes me admire her, but I'm also a little scared of her.

I'd recommend this one, yeah. But I'd also add the disclaimer that it's not exactly what I'm used to from KA.
2891 FOES VANQUISHED