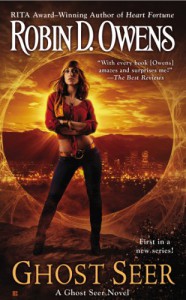 It's difficult for me to rate this one. I almost DNF'd it repeatedly because I despise characters that seem to live in denial. And Clare didn't even accept her psychic gift until halfway through. Yeah, 50 fucking percent of this story was Clare refusing to accept the truth in front of her. I want a strong heroine, not a weak one. But alas, things started picking up around 60%. I'd say the second half of this story is worthy of 4 stars - it was quite fun! But the first half? Barely 1 star. BARELY.

I enjoyed Zach, though HIS denial was almost as annoying as Clare's. He acted, though. As opposed to Clare just hiding under her blanket.

My other big complaint is the sex. Way too much time spent on sex scenes that weren't especially steamy or original. I skimmed them after the first two.

I'll definitely continue with the series, I'm really digging Zach+Clare, Enzo, and the ghost seer ability. But I pray the author eases back off the number if sex scenes. And I hope we're finished with living in denial.

But you can see why rating this is a hard one. 1 star, 4 stars, but 2 stars doesn't feel like it's enough. I guess we're going with 3 stars, with the clarification that it's an awful beginning to what ended up being an enjoyable story. That works.
2891 FOES VANQUISHED